Altus Press is excited to announce its new book releases to premiere at Pulpfest in one month: Available in several formats, these will be available at Pulpfest at Mike Chomko’s table. You will also be able to order them from all the usual online stores and at altuspress.com. Check out the details below: 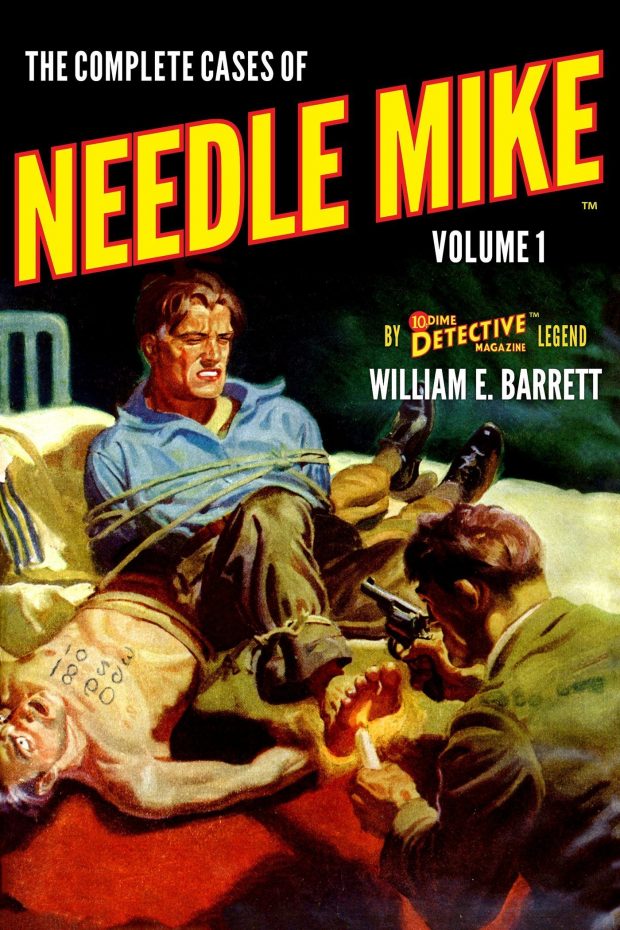 A millionaire playboy with a yen for excitement, young Ken McNally disguises himself as the gray-haired, gold-toothed, jaundiced-looking proprietor of a seedy tattoo parlor in the “tenderloin” district of St. Louis. His unusual occupation frequently brings him into contact with underworld denizens who, willingly or accidentally, embroil him in criminal activities.

Written by William E. Barrett, Needle Mike found himself embroiled in nearly 20 hard-boiled mysteries originally published between 1935 and 1938 in the pages of Dime Detective, the prestigious crime pulp second only to the legendary Black Mask in its impact on the genre. 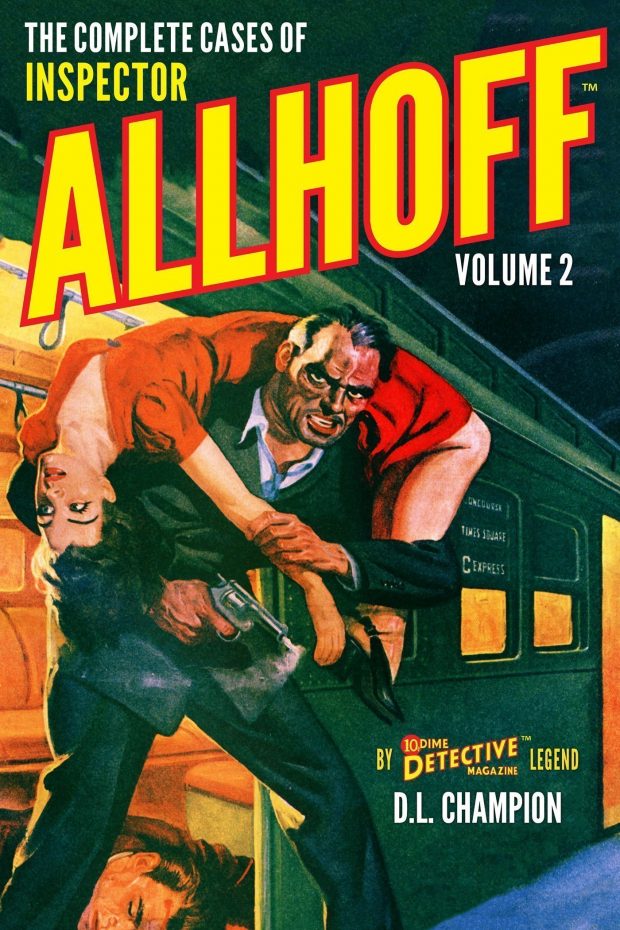 Brilliant, decisive, and hard-charging, Deputy Inspector Allhoff was the NYPD’s ace detective until bullets from a mobster’s machine gun robbed him of his legs, his career, and—in the opinion of an associate—his sanity. Yet Allhoff was too good a man to be put out to pasture, so New York’s police commissioner found a way to keep him employed and refer to him such cases as the department couldn’t or wouldn’t handle. Confined to a wheelchair and operating from a seedy tenement flat, Allhoff is assisted by two cops: Battersly, the rookie patrolman whose brief moment of cowardice cost the inspector his legs, and Simmons, the bitter career cop who detests Allhoff but sticks with the embittered cripple to protect his own pension. 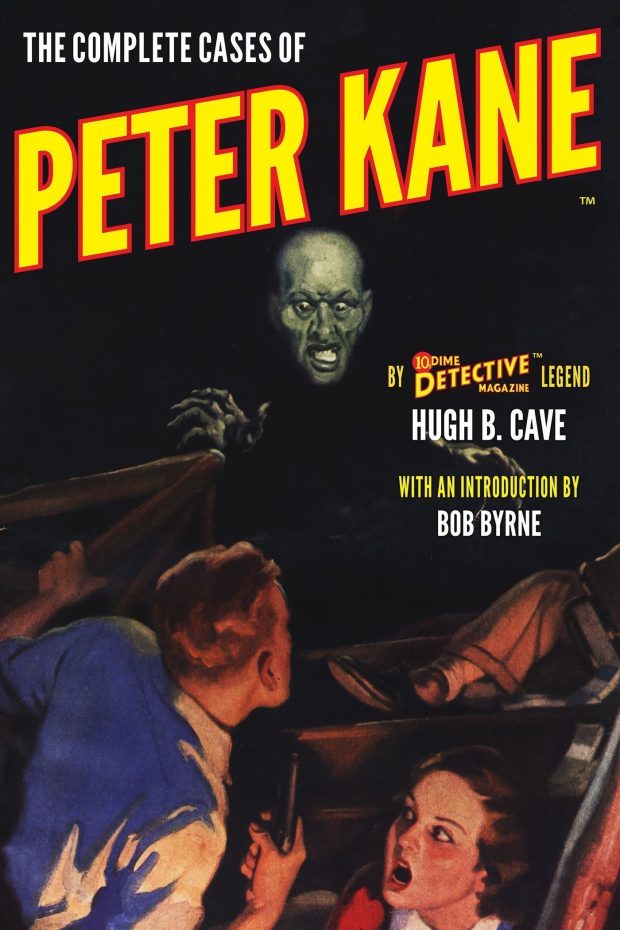 The Complete Cases of Peter Kane (The Dime Detective Library)

by Hugh B. Cave, introduction by Bob Byrne

No longer a Boston police officer, hard-boiled drunk Peter Kane made the easy transition to work as a P.I. Though now in private practice, Kane had a knack for cracking cases while constantly inebriated. Collecting the entire series, along with an all-new introduction by Bob Byrne.

Written by Hugh B. Cave, Kane stumbled through nine gin-soaked yarns published between 1934 and 1942 in the pages of Dime Detective, the prestigious crime pulp second only to the legendary Black Mask in its impact on the genre.

Contains the following stories: “The Late Mr. Smythe,” “Hell on Hume Street,” “Bottled in Blonde,” “The Man Who Looked Sick,” “The Screaming Phantom,” “The Brand of Kane,” “Ding Dong Belle,” “The Dead Don’t Swim” and “No Place to Hide.” 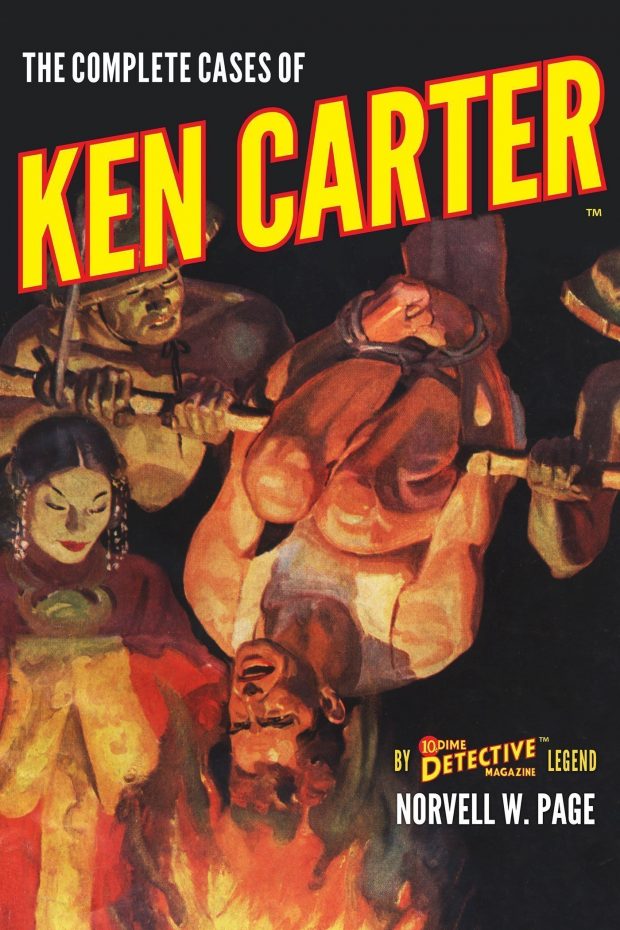 The Complete Cases of Ken Carter (The Dime Detective Library)

Immediately before picking up the reigns of writing the adventures of the Spider, pulp writer Norvell Page introduced the weird detective mysteries of another, similar adventure character, Ken Carter. Running in the hard-boiled pages of the 1930s detective pulps, Ken Carter battled a myriad of offbeat villains in a series which is clearly a prototype of Page’s style of novels he soon later wrote of the Spider. Collecting all seven stories, along with their original illustrations. 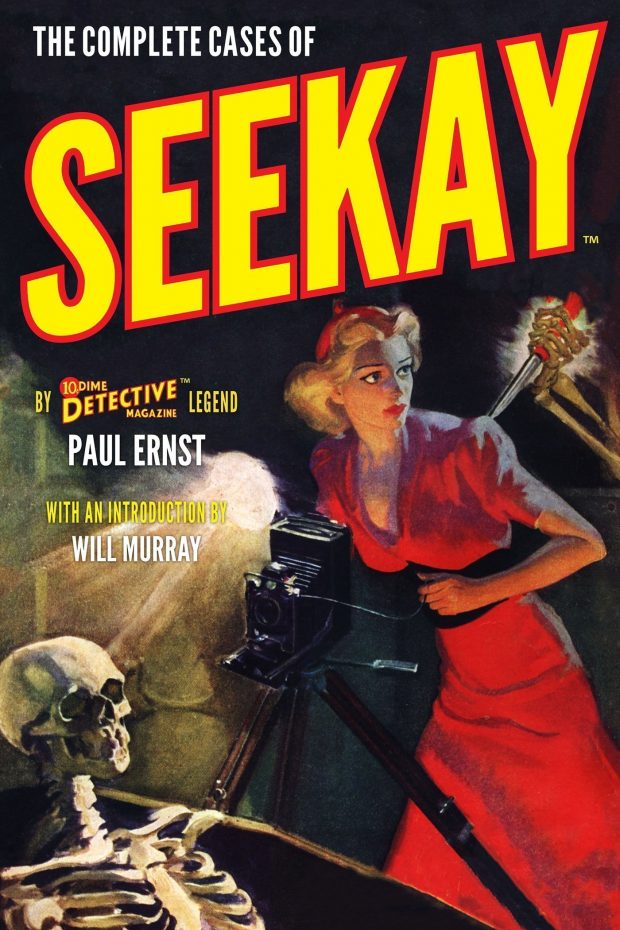 The Complete Cases of Seekay (The Dime Detective Library)

by Paul Ernst, introduction by Will Murray

The cases he takes up are often bizarre and grotesque, but no more so than this anonymous private investigator himself: Seekay’s entire face is covered by a mask of pink celluloid, with only his “burning black eyes” visible to those who come into contact with him—and who almost invariably are unnerved by the experience, whether friend or foe. Collecting the entire series, written by the writer of The Avenger, Paul Ernst.

Contains the following stories: “Madame Murder—and The Corpse Brigade,” “The Corpse With The Third Eye,” “Case Of The Smoking Skulls,” “Two Tickets To Hell” and “Widow Of The Talking Head.” 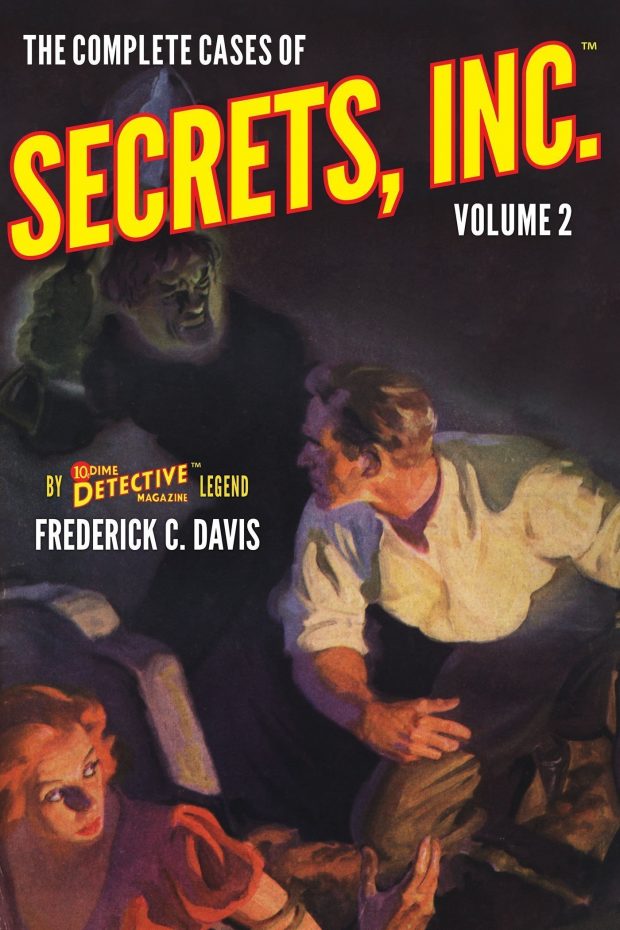 From 1933 to 1935, Frederick C. Davis chronicled the cases of Hollywood P.I. firm Secrets, Inc. Led by Clay “Oke” Oakley and assisted by Cherry Morris and Archibald Brixey, Secrets, Inc., investigated some of the weirdest and most ingenious crimes in the long history of Dime Detective Magazine—all centering around the film industry. Volume 2 collects the final five mysteries.

Contains the following stories: “Death on Delivery,” “Tracks of the Turtle,” “Blood from the Parrot,” “The Green Ghoul” and “Doorway to Doom.” 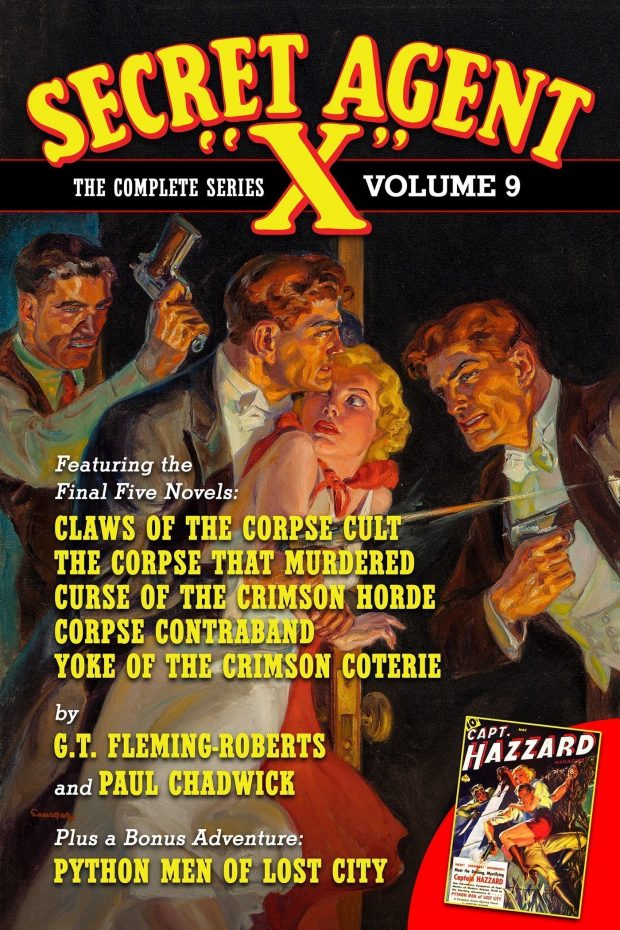 by G.T. Fleming-Roberts and Paul Chadwick

For 41 issues from 1934 to 1939, SECRET AGENT “X” battled the forces of evil in the pages of his own pulp magazine. Now, for the first time… the complete pulp series is being reprinted in nine deluxe omnibus editions! The text has been reset and all the original interior illustrations have been remastered. This volume contains the final five stories, by G.T. Fleming-Roberts and Paul Chadwick: “Claws of the Corpse Cult,” “The Corpse that Murdered,” “Curse of the Crimson Horde,” “Corpse Contraband” and “Yoke of the Crimson Coterie.” PLUS: the one-shot Captain Hazzard adventure “Python Men of Lost City” by Paul Chadwick. This is THE Secret Agent “X” reprint series to own! 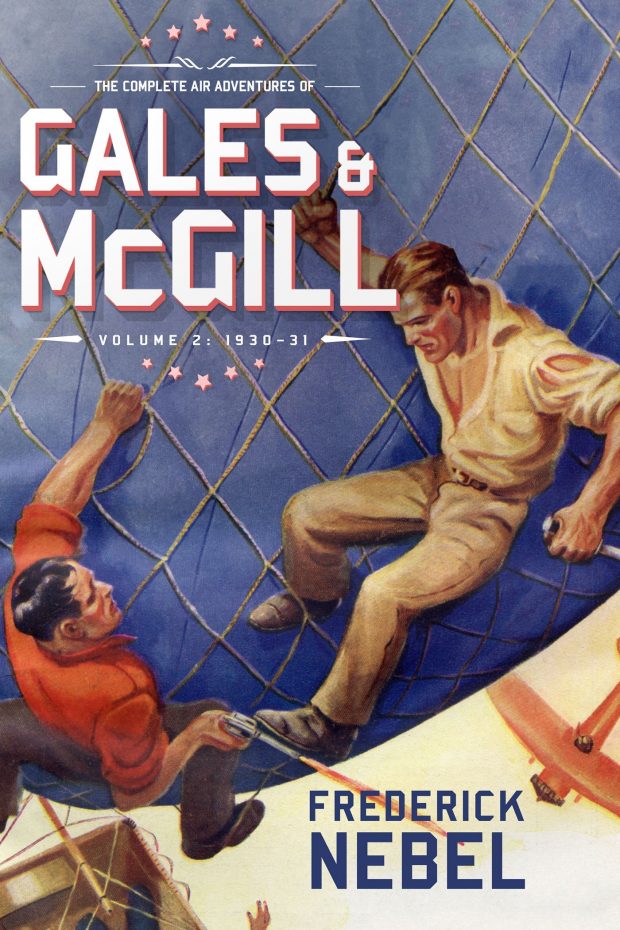 Follow Bill Gales and Mike McGill, hard fighting and high flying soldiers of fortune; freelancers for hire from China to Borneo and beyond. Follow their hard-boiled exploits in the sinister Far East. This, the second of two volumes, collects the last seven tales, written by Black Mask alum Frederick Nebel, and the novel Bloodhounds of the Sky ripped from the pages of the Fiction House rough paper mags, Air Stories and Wings. 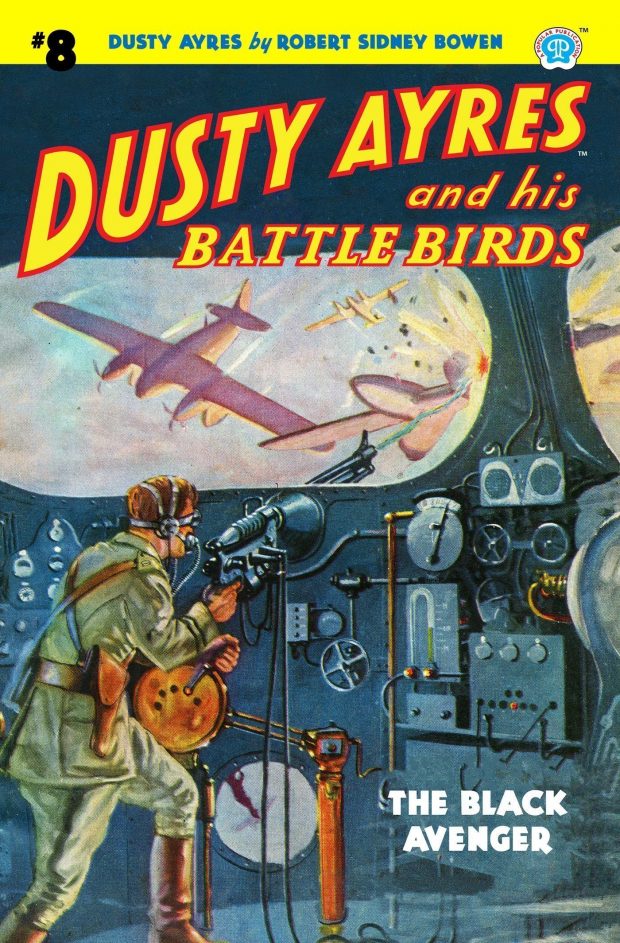 Dusty Ayres and his Battle Birds #8: The Black Avenger

“To Captain Ayres: The greatest among us has died by your hand. We, the living, are pledged to avenge that loss. Within forty-eight hours you and your comrades will be wiped from the face of the earth. Nothing can save you!” This message, signed Ekar, was dropped on Dusty’s drome; at the same time another Yank air field nearby was wiped out by a new horror weapon—a flaming rain that destroyed everything it touched! How can America fight this new menace? How can she keep the Blacks from crossing her borders?

The Altus Press Independence Weekend Sale Is On!

Got old pulp magazines or original art to sell? Contact us to make you an offer... highest prices paid.

We've strived to make the best-looking pulp books available anywhere, collecting the best and the most obscure of the pulp's golden age.

Get hundreds of high quality pulp reprints in print and eBook formats.

The Home of The Spider, Doc Savage and Tarzan

Steeger Books is pleased to be the publisher of Will Murray’s All-New Wild Adventures series starring pulp heroes The Spider, Doc Savage and Tarzan.

Get the Latest Steeger Books News