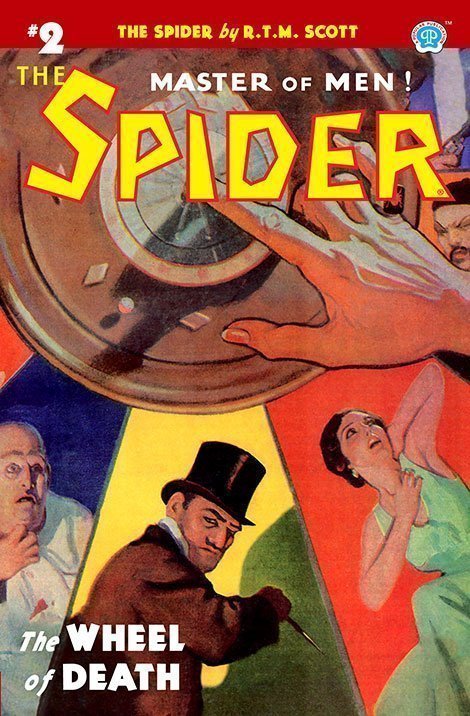 The Spider #2: The Wheel of Death

The Spider #2: The Wheel of Death

Mysterious death, suicide, and madness took uncanny toll of New York’s most prominent citizens. Only the Spider sensed the presence of the criminal genius whose tentacles were strangling the city—and the Spider was next on the crime monster’s death list!

Mysterious death, suicide, and madness took uncanny toll of New York’s most prominent citizens. Only the Spider sensed the presence of the criminal genius whose tentacles were strangling the city—and the Spider was next on the crime monster’s death list!

John Fleming Gould was the primary interior illustration man for the early days of Popular Publications, placing art in Operator #5, The Spider, and Dime Detective magazines, among others.

There are no reviews yet.

Be the first to review “The Spider #2: The Wheel of Death” Cancel reply

The second Spider story is titled “The Wheel of Death, and like the first was written by R.T.M. Scott. The original was published in November 1933. Like the first, it does not live up to the standard that will be set by Page in the future. The story is not terrible… indeed, the first 30% of the book was a bit of a page turner and generally quite creative and entertaining. The last chapter was also fun, but most of the middle was a lot of talking with not much action.

A local company owner is attempted to lock up NY City politicians using drugs, women, bribes, blackmail, and murder with the help of mobsters. Wentworth/Spider becomes involved when he saves a distressed damsel and discovered that her father was on death row awaiting execution after being framed, a small part of the conspiracy that leads the Spider taking out the owner and mobsters.

Jackson the chauffeur is introduced briefly in passing, although even his first name is not given. The later Spider costume is not yet in use.

Scott’s Spider is not horrible, but it came out in 1933 when several other heroes were being introduced in the pulps, such as Doc Savage, after the success of the Shadow. There is nothing special about Scott’s Spider, only another vigilante among many. I have read speculation that Scott was fired from the series; I do not know if he was, but Norvell Page writes the next 35 stories before starting to share the load with others, and Scott does not write another. The Spider was characterized as the “Master of Men” from issue 1, but it is clear that Scott’s Spider did not live up to this description. Despite the Berkley covers, the Spider did not have the Spider’s cape and mask while Scott was writing the first two stories.

In 1969, Berkeley started a plan to run of all 118 Spider novels in order; they stopped after the fourth one. Scott’s first two were sold as a bundle; for readers to whom the Spider was new, my guess that these two first novels guaranteed failure for the series.  Perhaps if they started with the third, one of the best Spiders ever written and the first by Norvell Page, they might have picked up new readers, and published many more of these stories.

The Bat Strikes Again and Again!